Yes this is a “Challenge” post more for myself but if anyone wants to join in I would love to hear from you.  The challenge:  is not to use the microwave for a whole month.  Instead use this thing called the stove, crock pot or toaster oven.  For me this is extremely difficult because I do a lot of leftovers during the week and “nuke” them for the kids.  Recently my “nuking” has become just that nuking, beyond edibility.  Nothing says yum like an over cooked bowl of noodles or rice that are still cold in the middle.  I love my microwave but we have a love hate relationship and quite honestly lately it has been a whole lot of hate.  I decided after the last thing of frozen vegetables I cooked for myself (outside nuked to a crisp inside still frozen – yes I did stop and stir half way) I was giving it up.  I honestly have no idea how long this will last or if it will last but I am making an effort not to nuke my kids food or my food.  Besides it gives me a reason to really cook and I love to cook.  It has been a whole week so far (I started the 20th) and I must say my food tastes better, it could be psychological but it really does taste better.

Expect more Crock Pot recipes and less microwavable recipes (we all know how my I LOVE my microwave) but I think this is a move for the better, not just for my family’s nutrition but for my sanity because fighting with kids over not eating my nuked food is getting old.

Did I mention I got a new cookbook on my vacation?  So I am really excited to try some of the recipes in there.  So if you want to to attempt the No Microwave Challenge I would love to hear from you, leave a comment on this blog post.  I will try to update my progress once a week on Tuesdays so everyone will know how we are doing and also share a new recipe we tried.  The other reason we are trying this is because my kids have been horribly picky since getting back from vacation (we didn’t eat a ton of fast food but we did eat some making “real” food very hard when someone screams for McDonald’s).  I am hoping getting them involved a little more in the preparation process will make them one more likely to eat “real” food again and two make my life a tad easier.

Breakfast tends to be one of the hardest meals for me not to nuke something (I nuke oatmeal and create egg sandwiches in the microwave).  When were visiting family my cousin made warm oatmeal without using the microwave (she also has 6 kids so eating and having everything prepared at once is a necessity for her).  I was impressed and it was really good (so much so both kids ate it).  I decided to start making food the night before so in the morning it would be ready to go.  It has been easier with the Booga but the Princess has been a tad picky.  The fact the recipe was the same exact recipe my cousin made and she ate makes no difference to her, she will not touch my oatmeal.  I did make the following recipe which she did eat (she complained it had too much cinnamon in it but she did eat it) so I decided I would share it with you. 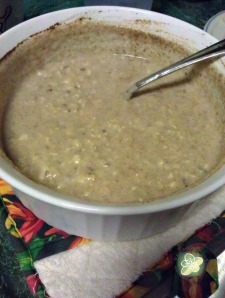 The kids eating their oatmeal (sort of)