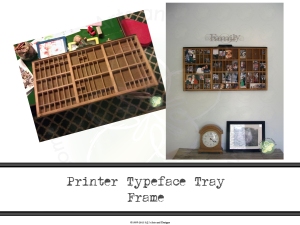 Several years ago Jeff bought a printer typeface tray for me.  I had it hanging in my then “studio” and in Booga’s room for a while.  When we finally moved Booga into that room I removed the shelf and it went in the closet. Originally for the living room wall  I was thinking about a nice Martha Stewart Style arrangement with the frames and perfectly staged photos.  There are several problems with that one being we don’t have any professional photos of the four of us, well alone the rest of the family.  My arrangement was stuck to the wall and there it stuck for over a week.  It finally dawned on me I could use the printer’s typeface tray, after much searching Jeff found the tray in the back of Booga’s closet.

I wanted some of the photos raised and others to be dropped back so I used chip board to prevent the pictures from bowing.  I also didn’t want to use a liquid glue or anything that would damage the tray or the photos (I may want to remove them someday) so I used Therm-o Web 1/2″ Double-Sided Super Tape to adhere everything. 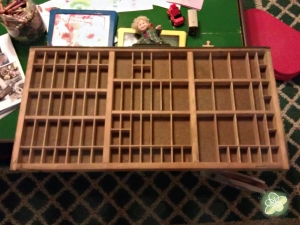 Chipboard backing to some of the photos 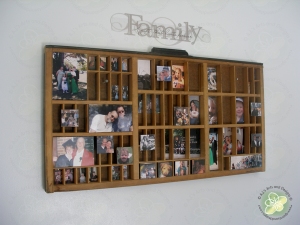 Side View of the Typeface Tray

Side View of the Typeface Tray

Finished on the Wall

The project was quite easy and I am really pleased with the outcome.  I have a nice “new” frame displaying photos of family and friends something our old living room lacked.