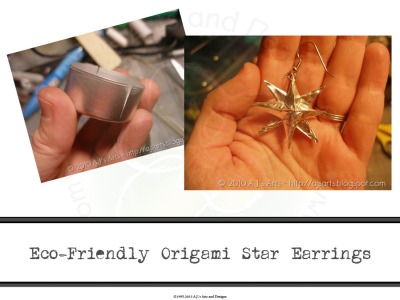 I am going to be quite frank and not a fan of origami.  I love origami but have always had a problem making origami things.  I saw those beautiful origami stars and really wanted one, so I Googled how to make one.  I was successful in making a paper one then I thought it would be really cool if I would make them out of metal.  I needed a metal that would bend easy, hold it’s shape and look good without paint – tea light candle tins!

Take a tea light candle tin.  Make four cuts one on each side.

Take a medium square clay cutter and push it down.

Rub the bottom side of the tin so the square shape shows.

Cut out the square.  Smooth the square with a bone folder.

Fold in half.  Crease with a bone folder.

Fold the other way.  Crease with a bone folder and open to look like the above photo.

Fold into a triangle.  Crease with a bone folder, trim with scissors.

Fold the other way to form a triangle.  Crease with a bone folder, trim with scissors, unfold.

Fold each piece in forming a triangle.

Take each triangle an fold left over right so the point pops up.

I then put a needle through the tip so I could put a jump ring through it.  I made another star the same exact way.

I hot glued them together like this.  This process was a little on the warm side so be careful with the hot glue.

I then attached the fish hook earring to the jump ring.  The earrings are extremely light considering how big they are approximately 1”x1”.